CleanOxide Liquid 75 is pure Chlorine dioxide which is a highly effective biocide ideal for use in reverse osmosis systems. CleanOxide Chlorine Dioxide has all the important regulatory approvals in Australia and overseas to be used in water treatment and food processing.

Many strategies have been developed in an effort to control biofouling of Reverse Osmosis membranes including the use of sodium hypochlorite, non-oxidising biocides, heat and pH swings.

Controlling the presence of food sources in the feed water and other good housekeeping practices also contribute to controlling the build up of biological contamination on the membrane.

Oxidising biocides such as hydrogen peroxide and chloramines have also found some limited use for aggressive cleaning of Reverse Osmosis membranes when other treatments have failed. Special care is required with these oxidising agents to ensure that no iron or manganese is present in the feed water as the presence of these elements can result in membrane damage.

When dosed into the reverse osmosis water treatment system at the recommended rate, CleanOxide will control bacteria, fungi, viruses, algae and biofilm. Higher rates will allow the control of micro-organisms on hard surfaces contacted by the irrigation spray such as workbenches, pots and glass in greenhouses. 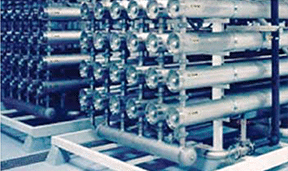 Reverse osmosis membranes are made of a variety of polymeric materials as well as composites of several materials.

In general, chlorine dioxide has been shown to be compatible with commonly used Reverse Osmosis membrane materials at low concentrations (<3mg/L) well above the recommended rates at which CleanOxide Liquid 75 is used.

However, Natural Water Solutions strongly recommends that CleanOxide Liquid 75 is tested on a small portion of the membrane at the maximum proposed rate, if there is any doubt about the compatibility of the membrane material with chlorine dioxide.

It should also be noted that because chlorine dioxide is a gas dissolved in water and is not hydrolysed by the water, it can diffuse into the membrane and pass through the membrane to provide biocidal protection downstream of the membrane. This may be of considerable advantage in some situations where the discharge water is for drinking.

In other situations, where very high purity in the discharge water is paramount, great care should be taken to use CleanOxide Liquid 75 only occasionally to control biofouling.